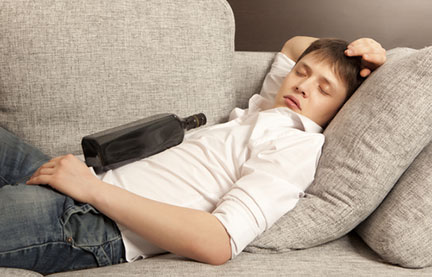 The abusive brain will likely experience cravings and even a small amount of the mental obsession which accompanies the overuse of alcohol. However, what only someone who has fully developed alcoholism will struggle with are tolerance and withdrawal. Tolerance is what occurs when one develops a threshold for intoxication. An amount of alcohol which used to get someone drunk, create euphoria, or cause the feelings they enjoyed about drinking is no longer enough. Each time someone increases their amount of alcohol consumption, within a few weeks to a few days time they have to drink more. As tolerance continues to grow, the brain becomes more chemically reliant upon the presence of alcohol. Eventually, it creates symptoms of withdrawal both as a signal for more alcohol and as a sign of alcoholism. Withdrawal symptoms are essentially the warning signs from the brain that it needs more alcohol. However, it also means that it has become physically and mentally dependent upon alcohol. Despite negative consequences socially, inter-personally, or personally, there is a continuous submission to the need to drink.

Both people who abuse alcohol and those who have developed alcoholism might feel a struggle to be able to, or even want to, stop drinking. For those who abuse alcohol, it will be easier to give up their drinking habit because they won’t have become chemically dependent. Alcoholics, on the other hand, will not feel as though they can stop. Additionally, their psychological chemical dependency on the drug will result in a peculiar mental state in which they convince themselves that they can have “just one”. This is a defining characteristic of alcoholism or alcohol abuse. Typically, an alcoholic cannot have just one drink. More importantly, after that first drink, they are unable to stop at all. Alcohol abuse will include a heavy if not abnormal amount of alcohol. However, such individuals usually have the capacity to stop at some point.

If you are struggling with controlling your drinking or are experiencing problematic drinking patterns, call Aurora Recovery Centre today. Our doors are open to men and women earnestly seeking recovery and a change in their lives when it comes to their relationship to harmful substances. For more information on our residential treatment programs and community of recovery, call 844-515-STOP.