Monkey’s like getting drunk. In jungles around the world, monkey’s are drawn to fermenting fruits. On some tropical resort island, alcoholically-inclined primates steal patron’s drinks all day. Are monkeys alcoholics?

Research indicates that monkey’s consciously and voluntarily choose fruit with high levels of alcohol concentration over other fruit. 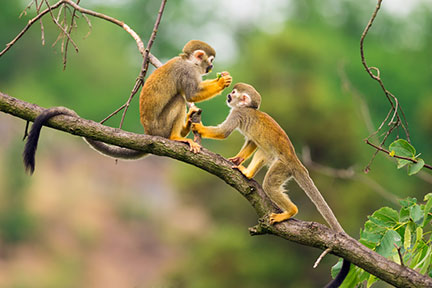 Can We Learn about Human Alcoholism from Monkeys?

In a recent study, different types of primates were offered sugary water with varying levels of alcohol concentration. Across the board, the animals chose the water with the highest concentration of alcohol. One instance even showed the animal using its fingers to try and get every last bit of alcohol it could from the cup.

There are evolutionary cues to pick up on from drunken monkeys.

The researchers indicated that the vapor of alcohol is an olfactory signal. Smelling alcohol from afar, the monkey’s are able to locate sources of food. Additionally, repeatedly eating alcoholic foods is good for fat storage, a necessity for animals in the wild who don’t have grocery stores and restaurants. Humans, unfortunately, do not benefit from fat retention and generally find consistent alcohol consumption to be adverse.

If humans are down-line from primates, alcoholism may have had good intentions. Modern society post-prohibition promotes excessive consumption of alcohol. It is widely available in many forms allowing it to be found almost anywhere. Humans don’t have to hunt for alcohol as a means of survival, though they might if they become alcoholic. The tendency toward higher alcohol beverages can lead to understanding of alcoholism. Since the trend is to get as drunk as possible, the roots can be seen in the monkey’s patterns.

Signs and Symptoms of Alcohol Intoxication

Even monkey’s get tipsy from eating fermented fruit or drinking alcoholic beverages. Alcohol intoxication can be detected by noticing these signs and symptoms: