Binge drinking is not alcoholism, but it is equally as dangerous. Drinking to an excess that brings the blood alcohol concentration over 0.08 grams is considered binge drinking. For men and women, that can average to five or four drinks in a two hour setting, respectively. Research findings reveal that 1 in 3 people drink excessively, but that none of them qualify as alcoholics. According to survey, 10.5 percent of binge drinkers qualify as being alcohol dependent. 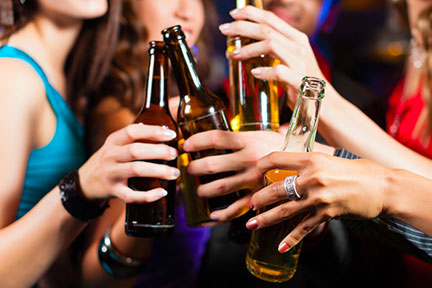 What differentiates a binge drinker from an alcoholic? Binge drinking and alcoholic drinking both have to do with excess. However, there is one defining difference: a binge drinker will be able to stop their excessive drinking. An alcoholic will feel unable to stop. There is a catch. A characteristic of binge drinking is being unable to recognize one’s own limits. One drink unintentionally turns into four. Binge drinkers will not likely drink to the point of blackout that many alcoholics do. That does not mean they are free from alcohol-induced harm. Driving while under the influence, alcohol-related auto accidents, and alcohol-related injuries (including death), are largely due to binge drinking.

Health problems can arise from binge drinking similar to alcoholism, including:

Cravings, obsession, and withdrawal are signs of alcoholism, but are not effects of binge drinking. An episode of binge drinking can, and likely will, result in a hangover. Waking up after binge drinking will not likely result in the tremors, sickness, and cravings one has when they are an alcoholic. Interestingly, a binge drinker might fixate on their next drink. Medical studies indicate that an average of five to seven alcoholic beverages per week can provide health benefits. Rather than consume one beverage per night on average, a binge drinker will consume all of the beverages on just one night.

Though a binge drinker has the ability to stop drinking once they begin, they may find difficulty in not binge drinking when they do drink. Still, this does not constitute alcohol dependence or alcoholism.

Abusive consumption of alcohol is problematic and should be taken seriously. If you or a loved one are concerned about binge drinking behavior call Aurora Recovery Centers today.