Home » Resource Centre » Can’t Think Clearly? You May Be Depressed.

Depression can feel like a cloudy haze, a heavy weight that burdens your every move, feeling, and thought. Some days, you might feel like you aren’t thinking clearly. It’s as if your thoughts won’t fully develop. You can feel the beginning of a thought, but it doesn’t feel entirely connected, like that thought simply stops or gets stuck. Other days, you feel you can’t think at all. Your mind exists in a space that is almost like an isolation chamber- dark, floating, and just suspended in darkness 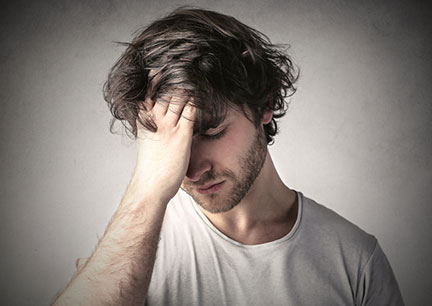 Symptoms like enduring sadness, lethargy, lack of motivation, and pessimism are marks of depression. “Being depressed” is generally assigned to the inability to think clearly- the overwhelming emotions and feelings just get in the way.

Depression is commonly treated with SSRI’s and antidepressants. However, many of the “thinking” issues now associated with depression are cognitive impairments. Though antidepressants relieve symptoms of depression, they do not remedy cognition. Antidepressants relieve symptoms related to mood. Cognition is not synonymous with mood, it involves the executive functions and flexibility required to make the millions of everyday decisions. There is surmounting scientific evidence that unclear thinking isn’t just a byproduct of depression. Depression actually changes the way you think because it changes your cognitive capabilities.

Paying attention feels like it requires a lot of effort when you’re depressed. Depression impairs the ability to focus long term and process the information you’re receiving.

One of the cognitive functioning main jobs is to take in information and create knowledge from it. When cognition is impaired it feels nearly impossible to comprehend external stimuli.

As a result, making informed decisions, or any decisions, is greatly challenged. Executive functions are the brain’s way of laying out the steps which need to be taken to achieve a certain goal. These can be as simple as the nervous system directing muscles in the foot and leg to walk. Depression can often feel like we’ve forgotten how to do anything.

In part, that can be due to how depression affects the memory. Taking in new information and processing it is what creates memory. Through experiential learning we gain new knowledge and commit it to either long term or short term memory. Cognitive impairments in depression create a negative influence in memory capabilities.