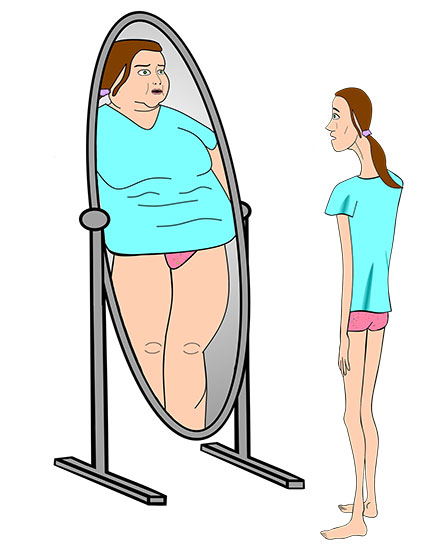 Anorexia nervosa (commonly referred to as anorexia) is a mental disorder characterized by obsessive calorie counting, excessive exercise and restrictive eating habits, which can lead to dramatic weight loss. People with anorexia have a distorted body image and see themselves as overweight, even when that is not the reality.

Bulimia nervosa (commonly referred to as bulimia) is characterized by binge eating followed by purging. Binge eating refers to eating an abnormally large amount of food in a short period of time. Purging refers to the subsequent attempts to eliminate the food consumed. People usually purge food through self-induced vomiting or laxatives.

Binge eating disorder is characterized by recurrent episodes of eating large quantities of food very quickly. Each episode is typically accompanied by a sense of loss of control and feelings of shame, distress or guilt. A person with binge eating disorder does not use compensatory measures like purging to counter the binge eating like a bulimic person would.