Home » Resource Centre » Are Some Foods More Addictive Than Others?

Most people have said it at least once in their lives. “I’m addicted to (insert food here)”. Popular culture uses this play on nutrition as a marketing tactic to promote the over-consumption of favorite foods. Indeed, there are some foods that seem simply irresistible. Is it because they are just that delicious, or is it possible that some foods are more addictive than others? 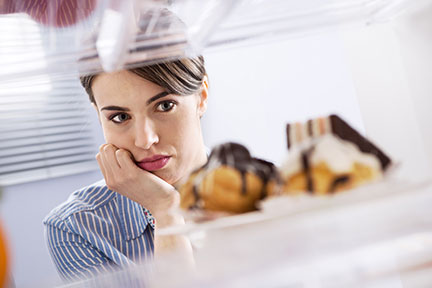 Nutritional science can provide a lot of insight about food. Cravings for certain foods is usually a signal that the body is deficient of other foods, vitamins, and/or minerals. Chocolate cravings can indicate a deficiency in iron, for example. Hunger cravings in general can sometimes be a sign that the body is dehydrated rather than hungry. Food science now shows that foods that drive the most cravings aren’t just desirable, they’re actually causing chemicals reactions in the brain.

Developing and sticking to a healthy routine of nutrition, diet, and exercise in recovery is an important practice. Active drinking and using drugs does a wealth of damage to the body. Not only does addiction affect the brain, it weakens the immune system, contributes to muscular atrophy, and usually inspires a decline in nutrition. When personal finances primarily revolve around buying alcohol and/or drugs, there is little priority left for things like food. In the cycle of craving and addiction, it is easy to fall into a routine of eating certain foods that are only going to worsen an already problematic situation.

Researchers at the University of Ann Arbor used the Yale Food Addiction Scale to determine the ten most addictive foods. Ranked in order of most addictive properties, these foods are:

These foods in particular are usually processed, meaning they are not made with whole food ingredients. Many healthy alternatives exist for each of these foods, but the general population is likely buying the unhealthy version. High in fat, added sugar, and carbohydrates, these addictive foods are consumed by the bloodstream more quickly than other foods. A similar comparison would be the way a drug addict uses certain drugs. Drugs like crack act more quickly than other drugs, making them more addictive. Similar to drugs, addictive foods trigger the production of dopamine, a pleasure-communicating neurotransmitter in the brain. Rather than seek these foods again for satiation or nutrition, a skewed pleasure/reward system in the brain will cause cravings for the euphoric sensations they create.