Morphine is a drug usually reserved for the severely injured entering an emergency room. Out of necessity to calm a patient and instantly relieve pain, doctors administer small doses of morphine. Patients receiving morphine describe the experience as sometimes warming, making them feel relaxed, drowsy, even euphoric. Heroin is about one and one half times the potency of morphine. Through the acetylation process, heroin becomes more soluble in the blood stream. Essentially, heroin hits harder and faster than other drugs. 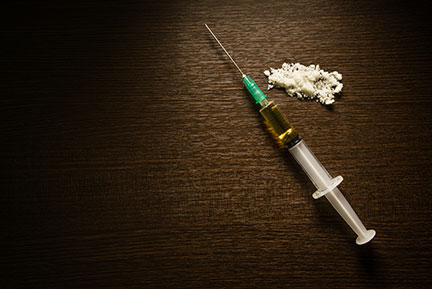 Heroin is Hard to Quit

Inherently, heroin is morphine. Morphine is a natural compound found in the opium plant. Hence, heroin, morphine, and other morphine-based prescription drugs are called “opiates”. Opiates are analgesic drugs, which is the medical term for pain-relieving.

The human brain is composed of neurons, receptors, and neurotransmitters that each serve a different purpose in communication. Opioid receptors in the brain work to inhibit pain. Taking a normal dose of morphine or an opiate drug causes moderate pain relief. Slowing the heart rate signals the brain that relaxation is occurring. More blood flows to the areas of pain, and the muscles relax. Exiting a state of fight-or-flight, as the brain does when it senses physical injury, emotions begin to relax as well. Abusing heroin, morphine, and other drugs takes this experience and magnifies it tenfold. Euphoria is considerably stronger and the physical effects are so significant that ‘nodding out’ is a common symptom.

Getting high on heroin can be about as climactic as sitting in a euphoric daze, falling asleep and subtly startling awake. Initially, the rush and climax of heroin’s euphoric effect lasts for ten minutes. It is enough to keep an addict coming back for more. Heroin becomes difficult to quit at this point. The high is too good to stop and the withdrawal is too awful to endure.

“Kicking” is the term applied to heroin withdrawal because the body, specifically the legs, become restless. People report that after just a few uses of heroin, especially in intravenous use, they wake up experiencing the flu. Surprising to most, they find that another shot of heroin is the only answer. Feeling the euphoria once more, the cycle continues.

Heroin is hard to quit because of these reasons and more. The intense elation, the devastating detox, and the lack of resources for safety. Heroin takes biological and psychological hold of the person using it, without any warning. Though quitting heroin is a significant challenge, it is a realistic possibility.