Part of the fun in recovery is discovering new activities to enjoy with friends. For some, old habits pass with resistance. Smoking is a difficult habit to kick in the early stages of recovery. Out of ritual and dependency, smoking is a helpful tool for maintaining a semblance of normalcy when everything else seems disrupted. Rather than sitting outside smoking packs of harmful cigarettes, recovering individuals opt for other options that can offer more culture, entertainment, and a community setting. Hookah is one of those options. 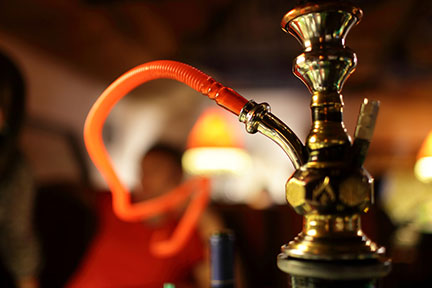 Hookah is often seen as a healthier alternative for smoking as compared to cigarettes, cigars, and especially illegal substances. Lounges, bars, restaurants, and shops offer hookah smoking areas. The whole culture is appealing. Usually, the scene is set with lush fabrics, opulent pillows and chairs, adorned with bright colors. Pulling inspiration from hookahs middle eastern heritage, the experience is culturally exotic and physically relaxing. Smoked from a water pipe connected to many long hoses (meant to accommodate the lounging), hookah is nothing more than flavored tobacco. Hookah pipes can also be used to smoke other non tobacco products. Shisha is the name of non-tobacco product smoked in a hookah made from herbs.

Hookah is not a Healthy Alternative to Drugs

The harmful and addictive substance found in cigarettes called Nicotine is still present in hookah. Smoking hookah over the course of one hour exposes smokers to up to 200 times the volume of smoke usually inhaled by a normal cigarette smoker. Not only does an hour long hookah smoking session expose a smoker to more smoke, it increases their exposure to harmful chemicals in the smoke. Along with nicotine, hookah smoke contains over seventy times the amount of tar in a cigarette. Additionally, hookah smoke has higher levels of nickel, lead and even arsenic. Both tobacco based hookah and shisha based hookah can create second hand smoke problems. Most alarmingly, the tobacco in hookah is just as addictive as the tobacco in cigarettes. As a result, hookah can produce even greater feelings of relaxation than cigarettes.

Recovery is not about running and hiding from experiences that might trigger a relapse. It is, however, about being informed and making wise decisions. Those decisions start with choosing a treatment center.

Aurora Recovery Centers is available to take your call and give you all the information you need on choosing wisely when it comes to treatment for your addiction. Call 1844 515 STOP today.