Home » Resource Centre » What Do I Need to Know About Bulimia?

Bulimia is one of the most common eating disorders next to anorexia. Though both eating disorders involve binging and purging, bulimia is different from anorexia. Anorexics are usually secretive about their eating habits, avoiding eating, binging in private, or secretly starving themselves. Weight difference in someone with anorexia is drastic. Bulimics will appear relatively healthy, without much differentiation of their weight from one day to the next. 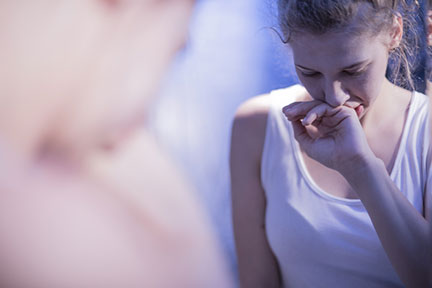 While bulimia, too, involves secrecy, the exterior normalcy of bulimia is often what allows them to hide their practice. Eating all the same foods in the same amount, if not more, than their peers, bulimics wait until they are in private to purge. Vomiting and the abuse of diuretics are the most common methods of purging in eating disorders.

What do I need to know about Bulimia?

In addition to the practice of purging is the practice of fasting. Participating in regular fasting is a spiritual tradition in many cultures and religions. For someone with an eating disorder, however, it is typically a set up for an episode. Fasting will result in a binge episode, which is often the intention. After the binge, the feeling of fullness or being ‘stuffed’ will be unbearable, resulting thereafter in another purge.  Fasting can come in different forms, from food restriction to over-exercising.

Extreme dieting, exercise, as well as binging and purging practices take a toll on the body. Bulimia is draining. Bulimics will feel bloated by the presence of food, as well as exhausted from a lack of nutritional energy and exercise. Acid from regurgitation can result in dental problems and deterioration of the gums.

Bulimia is a disorder of the mind, more than it is a disordered relationship with food. In fact, bulimia and most eating disorders are not about food. Food is the channel through which underlying and painful emotions can be communicated. Eating disorders like bulimia are about control, self-worth, and fear. Deeply afraid of not being good enough, Anxiety, depression, obsessive-compulsive disorder, and struggles with self-esteem accompany bulimia.

Eating disorders can be deadly. Bulimia causes long term damage to organs which can lead to organ failure. If you are concerned you or a loved one might be suffering from an eating disorder, please call Aurora Recovery Center today. We treat eating disorders in men and women seeking recovery. 1844-515-STOP.