Sometimes it’s an honest, however mindless, mistake. Taking a prescription medication with a quick sip of alcohol- how bad could it be? A sip small enough to get a pill down probably won’t do much harm. Finish the drink, or worse, finish the bottle, and you’re looking at a list of negative effects. The worst: death. 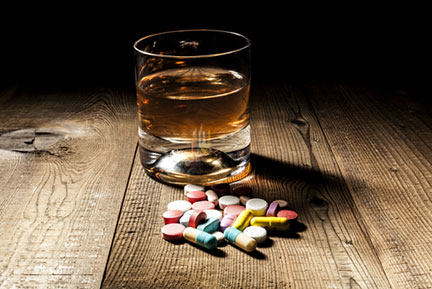 Accidental death due to the combination of prescription drugs and alcohol happens commonly. Famous celebrities like Heath Ledger have lost their lives due to the honest mistake. Ledger’s last comments were revealed as a conversation with his sister in which she urged him to stop mixing his medications with alcohol. Ledger died in his sleep that night.

Alcohol can enhance the effect of any drug, which is why drug addiction is so often co-occurring with alcoholism. Alcoholics don’t always like to call themselves addicts and addicts don’t always like to call themselves alcoholics. However, the abuse of medications, especially with alcohol, is addiction and alcoholism at the same time.

Benzodiazepines are central nervous system inhibitors and alcohol is a depressant. Together these substances can slow the body and the brain down to a stop. According to Scientific American “Alcohol circulating in the body eventually ends up in the liver, where it is metabolized by enzymes called alcohol dehydrogenase and cytochrome P450. The latter is also responsible for breaking down Xanax. The alcohol and drugs therefore compete for the enzyme, and this slows their rate of clearance from the body, causing them to remain in the blood longer, and at higher concentrations that make overdoses and accidents more likely.”

Similarly, opioids are analgesics and inhibit the respiratory system. Opioids alone can cause this effect, but the likelihood is doubled with the presence of alcohol. Many accidental opioid overdose deaths are due to the stopping of breathing while someone is in and out of consciousness.

The reckless combination of prescription drugs and alcohol shouldn’t be taken lightly. If you or a loved one are abusing prescription medications with alcohol, your life is in danger. Medical detox and residential treatment are two important first steps to a lifetime of recovery. Call Aurora Recovery Centre today for more infomation 844-515-STOP.