Happiness is not the expectation of unwavering consistency, despite popular belief. When someone is inexplicably and continuously down, it is seen as an anomaly. Why, how, many wonder, could such a desperate state be maintained? Depression is not a choice, but a deep manifestation of pain. A damaging myth about depression is that someone can just “get happy again”. Working through depression takes time, work, and therapy. 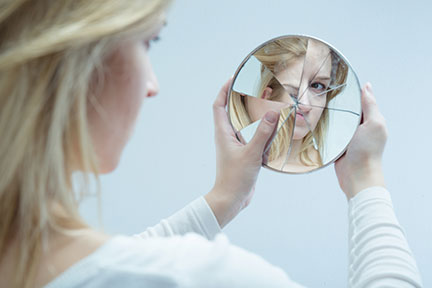 “You Don’t Look Like You Have an Eating Disorder.”

Eating disorders do not look the same. Anorexia and bulimia can come in the form of extreme starvation resulting in boney appearances. “Don’t judge a book by its cover” comes to mind for this damaging myth. How one appears causes great emotional pain and obsession when they are suffering an eating disorder. No matter how thin or thick one appears, it may not accurately depict their harmful behaviors or thought processes when it comes to food.

Teens and adolescents are a large population of mental health disorders including depression, anxiety, ADHD and eating disorders. Mental illness is not synonymous with puberty. Moodiness, irritability and emotional difficulty can be symptoms of deeper issues, not just teenagehood. Statements like “you’ll outgrow it” are invalidating, belittling a young person’s authentic experience. Repeated sentiments like this can drive young people with mental illness toward substance abuse, promiscuous sex, or other harmful behaviors to cope with their emotions. They may choose to refrain seeking professional help or therapy because they feel detached.

“You have nothing to be anxious about.”

Telling an anxious person to “calm down” when they are having an anxiety attack is counterproductive. Similarly, disregarding someone’s anxiety shames their emotional experience. Anxiety is a mental disorder in which the brain is consistently convincing itself of imminent danger. A person suffering from anxiety reacts to their own stress hormones with more fear. They’re aware there may not be anything to be anxious about. Until they learn how to regulate their emotions, they are unable to control their anxiety.

Addiction has repeatedly been proven not to be a matter of willpower. Indeed, when an addict decides to quit, they act within their own ability. Getting to that point is difficult, especially when the addiction is severe. Lost in their inability to cease using, addicts face shame, stigma, and guilt. Without the belief that they are strong enough to overcome addiction, many will not try.