Anorexic behavior is enticing to susceptible and insecure young men and women. The side effects of anorexia nervosa are what draws people to the idea of it the most: dramatic weight loss, complete control, and meeting the ideal beauty standards of perfection. However, seeing a certain number on the scale, fitting into a certain size, or looking a certain way in the mirror comes at a cost. Anorexia nervosa causes the body to weaken as it rapidly loses access to essential nutrients. Sudden heart failure and a heart weakening overtime are also effects of anorexia in addition to hair loss, change in skin texture as well as tone, and bone problems. Most importantly, anorexia nervosa, when taken to the extreme, can result in death. 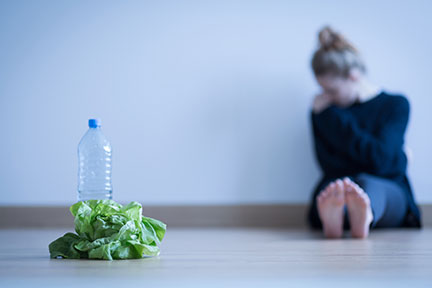 Dying to be skinny becomes a motto to live by and thrives in the online forums, chat rooms, photos, and social media profiles of Pro Ana websites. Pro ana is an online community supporting, encouraging, and providing instruction for anorexic behavior. From “thinspirational” posts about losing weight to fat shaming to guides for starvation, Pro Ana promotes harmful behaviors which can lead to psychotic break.

Globally, countries are taking a stand against the unrealistic ideal of thinness promoted by the media. France recently changed laws banning models who are too thin and Israel is requiring advertisers to include a symbol indicating a model has been digitally altered. Increasingly, action is being taken to promote body positivity as opposed to body hatred. Unfortunately, the Pro Ana community is widespread and the need to achieve perfect is not going away.

Last year, Canadian radio station CBC Radio did a story on new Canadian research indicating that the existence of pro ana websites might not be as harmful as previously thought. In 2012, CBC Radio interviewed Antonio A. Casilli, author of Digital Links: Towards A New Sociability? and founder of ANAMIA, a large study on online eating disorder communities. Casilli argued that censoring online pro-anorexia communities was ineffective and should be dropped altogether.

Perhaps taking the do nothing stance is not the most effective. CBC News provided an in depth look at online eating disorder communities in 2015, citing the harmful ways the communities help those who are struggling stay sick. “One in 20 young women in Canada has an eating disorder,” the article cites. In another article, the news source reported that for the Manitoba area, one in 10 Canadians with an eating disorder will die.

Eating Disorders do not have to result in sickness or death. Recovery is possible with treatment, therapy, and clinical support. Aurora Recovery Centre provides holistic based healing for eating disorder treatment, focusing on mind, body, and spirit. Through nutritional support and intensive therapy, eating disorder clients have the ability to heal. For more information, call 1-844-515-STOP.