Drinking alcohol is a way that many people have fun and let loose on the weekends, but getting drunk can actually induce a domino effect of negative effects on your overall health and wellness. Too often, young people head out for a night with friends with the goal of getting drunk in mind. As a parent, it is important that you teach your children about the risks of alcohol and the serious dangers of binge drinking. Binge drinking is most common among younger adults between the ages of 18 and 34, although it is also a growing problem among underage teenagers as well. 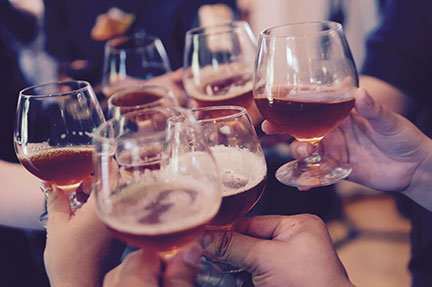 The National Institute on Alcohol Abuse and Alcoholism has defined “binge drinking” as habits that form a pattern of behaviour. A session of drinking is considered a binge when enough alcohol is consumed for the person’s blood alcohol concentration (BAC) percentage higher than 0.08 grams or more. For women, it usually means consumption of 4 or more drinks in two hours or less. For men, this level is usually reached with 5 or more drinks in the same time-frame.

Numerous risks can occur when someone is drunk. Common risks of binge drinking include:

In addition to these immediate risks, other long-term health consequences can also be the result of binge drinking: heart disease, liver disease, stroke, high blood pressure, cancer, and more.

How a Developing Brain is Affected By Binge Drinking

The brain is still developing in the teenage years, making this age group highly susceptible to long-term mental problems from heavy drinking. When alcohol is consumed, it has an effect on nerve cells. This disrupts the way the brain communicates with other parts of the body.

When these neurotransmitters are disrupted by alcohol consumption in the teenage years, it affects two important parts of the brain:

Prefrontal Lobe: The prefrontal part of the brain is used for decision making, judgment, planning, language, and impulse control. During the teenage years, significant changes happen in this part of the brain. Alcohol use by teenagers causes this area to shrink, which could affect the teen’s ability to make wise decisions.

Since the brain is still developing in the teenage years, it is common for teens to struggle with behaviour and mental problems due to alcohol use. The brain continues to go through developmental stages until the age of 25, with the most growth occurring between the ages of 12 and 17. When alcohol is used during these ages, it can lead to permanent mental illness and lifelong consequences.

Mental Problems that Persist into Adulthood

Not only is brain development affected by binge drinking, but this behaviour can also disrupt gene regulation. Studies have found that hindering the development of the brain for teenagers can promote anxiety that carries into the later years of life. Additionally, the person faces a higher risk of excessive drinking in adulthood. When someone starts drinking before the age of 15, the risk of alcohol dependence increases by four times.

Because of the critical problems that can carry into all stages of life, it is best for teenagers and young adults to seek help with alcohol recovery as soon as possible. The progression of binge drinking and alcohol dependence affects a person’s memory and thought functions. As a result, these brain development problems can impact all aspects of life, including relationships, education, career progression, and more.

At this point, it is unknown if the cognitive damage in binge drinkers is reversible. But, the best approach is to stop the unhealthy drinking behaviours as soon as possible to minimize the amount of damage that occurs.