Step Eleven: Sought through prayer and meditation to improve our conscious contact with God, as we understood Him, praying only for knowledge of His will for us and the power to carry that out. 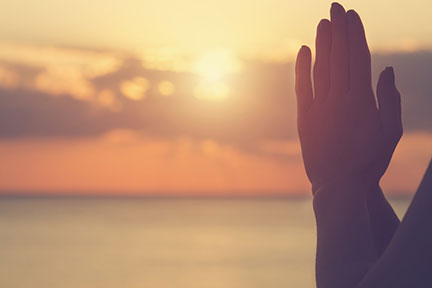 The Twelve Steps of Alcoholics Anonymous and many other fellowship groups are filled with prayer. Both the third and the seventh step include prayers as part of the action for taking the step. Step eleven, as evidenced above, is about daily practice of prayer and meditation. Pages upon pages of the primary text, The Big Book of Alcoholics Anonymous, talk about prayer. When talking about prayer, the big book authors describe what prayer is and how prayer works. They describe the prayer and meditation process as a two way communication system. Prayer is talking to God, while meditation is listening. Morning prayer, evening prayer, and prayer throughout the day are outlined. “Better men than we” are using prayer all the time, the authors encourage.

Alcoholics Anonymous is fundamentally a spiritual program. Having a spiritual experience which produces a psychic change is the foundation of the AA program for recovery. For decades, many have argued against the platform of spirituality in recovery, saying it is scientifically unsound. Yet, for millions of people around the world, AA and it’s spiritual program works. Recent science revealed that it is more than just mumbo jumbo. Prayer in recovery actually reduces cravings.

New York University tested a group of members of Alcoholics Anonymous for their study to find if all the praying really made a scientific difference. Presented with a ‘trigger’, something that could ignite cravings for alcohol, the AA members were given brain scans. The scans revealed two things. First, the alcoholic mind’s response to alcohol is emotional. In the brain scan, areas of the brain responsible for emotion were active. Second, in the AA members who actively participated in prayer, there was more activity in both emotional and attentional centers of the brain. Suggested by this evidence is that triggers are emotional for a recovering alcoholic, however, prayer greatly reduces the effect of that emotional response.

Highlighting this debate is almost comical. For the scientific and medical community, spiritual components to recovery for a ‘brain disease’ is fallible and illogical. Members of the AA and twelve step recovery community, however, embrace both science and spirituality. Though they may not see the effects of prayer on a brain scan, they feel the difference in their lives every single day they stay sober.