The specific set of symptoms of drug addiction vary from one drug to the next. Even for process addictions like sex or gambling addiction, the specificity is different. Each chemical causes a distinct chemical reaction which will be different in each person. For example, being under the influence of opioids causes the pupils to constrict to a pinhole size while being under the influence of a hallucinogenic substance can dilate the pupils greatly. 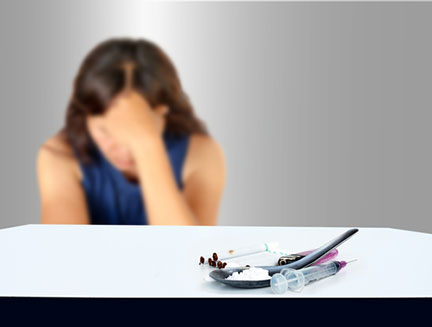 The physical symptoms of addiction are typically characterized by a drastic and oppositional change. Someone who is calm becomes more volatile. Someone who is a aggressive becomes more passive. Weight is either lost or gained. Social schedules either flourish or diminish. The true indication of addiction lies in three particular categories: tolerance, cravings, and an inability to stop. Addiction can happen in many levels. True chemical dependency, the definition of addiction, is the ultimate sign of a problem. You do not have to wait until you are completely chemically dependent upon a substance to seek help. If you are concerned you might have a problem with drug use, call Aurora Recovery Centre today.

Once tolerance settles in, there is a need to use more of the drugs. Putting an excess amount of chemical substances into the brain starts a vicious cycle. Tolerance rises more rapidly, demanding more drugs. Eventually, the brain becomes dependent on the drug entirely to produce dopamine. Producing dopamine is such high amounts due to drugs exhausts the brain of its natural ability to do so. Without any dopamine at all, the brain becomes imbalanced. Since the brain has now learned that drugs are the only source of dopamine left, it craves those drugs. Sending signals out to the body, cravings become both physical and psychological.

Grave consequences stand for the drug addict. After chemical dependency has set in, overdose becomes a reality. Physical danger lies in each use of the drug. Yet, life, as the addicted brain knows it, depends on the drugs. Such desperate need causes a blindness to other areas of life. A lack of consequence is a key indicator of addiction. Despite the immediate threat of death, loss of relationships, or loss of material possessions, and addict cannot stop using.

If you are addicted to drugs and cannot stop, it is time for help. Aurora Recovery Centre is here. Call 844-515-STOP today.