Home » Resource Centre » What Are The Dangers of Synthetic Drugs?

Synthetic drugs aren’t just a threat to the people who take them, they are a threat to the public as a whole. Social media sites like Instagram are widely unregulated in the way they allow the promotion of the black market for synthetics. Synthetics are impossible to stay ahead of because they are constantly changing names, chemical formula, and location of popularity. Trying to track down and prosecute a synthetic drug dealer can be like finding a needle in a haystack. 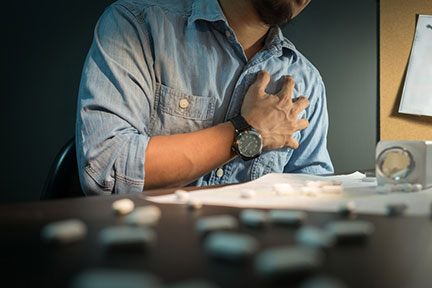 What are the Dangers of Synthetic Drugs?

The dangers of synthetic drugs do not stop there. Synthetics are so potent and powerful that absorbing them into the skin through touch, or breathing in their chemicals, can cause overdose and death. Most commonly, the dealers themselves don’t know what is in the drugs they are selling. In fact one report recently found that some synthetic drugs were made with battery acid. For example, before Fentanyl made global headline news after being the drug reported as the cause of death for musical artist Prince, it was taking other lives. In different parts of the country Fentanyl was hiding in drugs like benzodiazepines and opioid prescription painkillers.

Because synthetic drugs are hard to trace, the different parts of their make up contribute to different effects. Similar and consistent effects include:

Synthetic drugs are cheap, potent, and rapid tolerance building. Though the effects of synthetics seem bleak, the euphoria, to an addict, is worth every single hit, even at the expense of life itself. The drug is so potent that the surge of dopamine is tantalizing to anyone subject to addiction. Despite what can be horrendous side effects, addicts continue returning to synthetic drugs. Until law enforcement can find a way to control and regulate these drugs they may not disappear.