During the holiday season, we tend to relax our eating habits and enjoy some of the plentiful, delicious treats at celebrations and parties. While it is important to have fun with traditions and festivities, you also need to consider how your dietary choices are affecting your overall health.

The truth is that you can “have your cake and eat it too.” Finding the right holiday treat recipes will allow you to indulge without worrying about the impact on your waistline. You can make these healthy recipes at home to bring to your holiday gatherings, giving everyone a healthier alternative to the overabundance of refined sugar and fat. Here are three fun recipes to try this month: 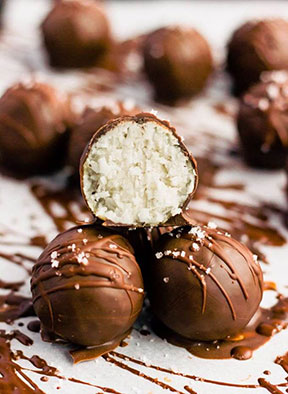 These coconut bites are sweetened with maple syrup and dipped in dark chocolate to help you cut back on refined sugar. It’s like biting into a sweet snowball without the guilt that comes from traditional holiday chocolates.

Put the coconut in a food processor or blender and pulse to create a flour texture. Place the processed coconut in a bowl. Then add the coconut oil, maple syrup, and vanilla extract. Stir until combined. Shape the paste into small balls by gently squeezing in the palm of your hand. Put the shaped coconut balls in the fridge for one hour.

Melt the dark chocolate. Dip the coconut balls in the chocolate using a fork. Allow the extra chocolate to drip off the fork before placing each ball on a cookie sheet or plate lined with wax paper. Store in the refrigerator at least 4 hours or until you are ready to serve these treats.

Whole grains and plenty of fibre in the fruit make this apple crisp an amazingly healthy dessert.

Preheat the oven to 350 degrees Fahrenheit. Prepare an 8×8 baking pan by greasing with coconut oil or non-stick cooking spray. Make the apple crisp topping by pulsing the flour, oats, coconut sugar, 1/4 teaspoon cinnamon, pecans, and coconut oil in a food processor. Set the topping aside.

Prepare the apples for the filling by combining the apple slices with 1 teaspoon cinnamon, as well as the maple syrup, nutmeg, and vanilla. Put the apples in the prepared baking pan. Top with the flour mixture. Bake for 50 to 55 minutes. The crisp is done with the filling is bubbling and the topping has a nice golden-brown colour. Allow the crisp to cool 10 minutes before serving.

This brownie recipe is simple to make since it only requires three ingredients. Enjoy a chocolaty treat while supporting your health.

Preheat the oven to 350 degrees. Prepare a loaf pan by greasing with non-stick cooking spray or coconut oil. Melt the nut butter in a small saucepan on the stovetop. In a mixing bowl, combine the nut butter, banana, and cocoa powder. For a rich, chocolate taste, use up to 4 tablespoons of cocoa powder. Mix well.

Put the mixture into the pan and bake for 20 minutes. Cool completely. Cut into brownies and serve. Store in the refrigerator.