Many people’s bank accounts are running on low on funds from the holiday season, even though they are jumping right into their New Year’s resolutions.

For many people, this year, they hope to save money and eat healthy for their resolutions. But, according to a new study by Dalhousie University and the University of Guelph, people will be spending about $400 more on food this year.

So how can you save money while trying to eat healthy? 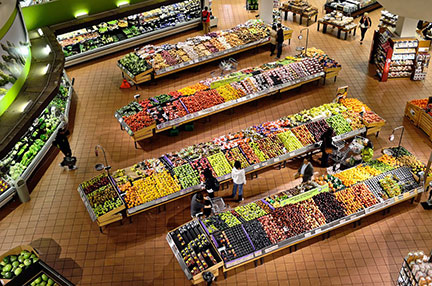 Buying things you like, especially if they are healthy dried goods such as rice, pasta, and beans in bulk will help you maintain your goal of eating healthy because their shelf life is practically infinite.

Buying food in bulk also comes in handy with frozen fruits and vegetables. The expiration dates on these items tend to be months or even a year from when you initially purchase it.

When you get to the store, don’t grab items you see in ads. Instead, try the generic brands. All food manufacturers must follow standards to provide safe food, that’s why most generic brands typically match the same quality as other national brands, their just less expensive.

To ensure you get the same nutritional value with off-brand items, compare the labels and ingredients.

Planning your meals is vital for maintaining a healthy, well-balanced diet at little cost. A helpful way to set a standard of how to plan your weekly meals is by comparing what you already have versus what you think you may need.

There is usually plenty of food hidden in the back of your cupboards or freezer that you can use before restocking.

Purchase items you know for sure that you will use that week, so you don’t end up having to throw it away.

It may be easier and faster to cook something with processed food, but whole foods tend to be quite cheaper than their processed counterparts.

For example, a block of cheese will not only last longer than a bag of shredded cheap, but it’s cheaper too. Dried goods such as canned beans are cheaper than refried ones, along with whole grains, brown rice, and oats, which are cheaper than boxes of cereal.

Cook Large Portions and Use Your Leftovers

Cooking large meals can save you both time and money. You can always use leftovers for lunches, in other recipes, or freeze them to use in the future.

Leftovers usually make for good stews, soups, stir-fries, sandwiches, salads, and burritos, which are all great options for people on a budget.